Andy Warhol once was avantgarde and he still is. He seems to be one of the first well known artists to defend the concept of artwork as a common good.

In his last Interview Andy Warhol is asked by Paul Taylor, if he had a problem with copyright infringement. The question concerns Warhol´s John Wayne pictures, that belong to a series of ten prints called: “The Cowboys and Indians” (1986). Warhol portrayed figures like John Wayne and Teddy Roosevelt as “Cowboys” to depict them as male American heroes. 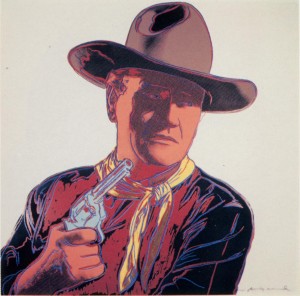 Paul Taylor
You don´t do anything about it?

AW
No. It got a little crazy when people were turning out paintings and signing my name.

PT
What did you think about that?

AW
Signing my name to it was wrong but other than that I don´t care.

PT
… If indeed anyone can manufacture (a picture), the whole idea of the artist gets lost somewhere in the process.

AW
Is that good or bad?

PT
Well, first of all, do you agree with me?

AW
Yes, if they take my name away.

Andy Warhol produced copies of pictures (Campbell´s Soup Cans, press clippings etc.) and copies of his copies. Consequentially he didn´t blame people who copy his copies. He only had a problem with people that copied his (original) name. It still needs to be clarified, what is so original about the name of a person – artist´s, copyist´s or anyone´s.

(Images shown here are copied from the net/Andy Warhol)